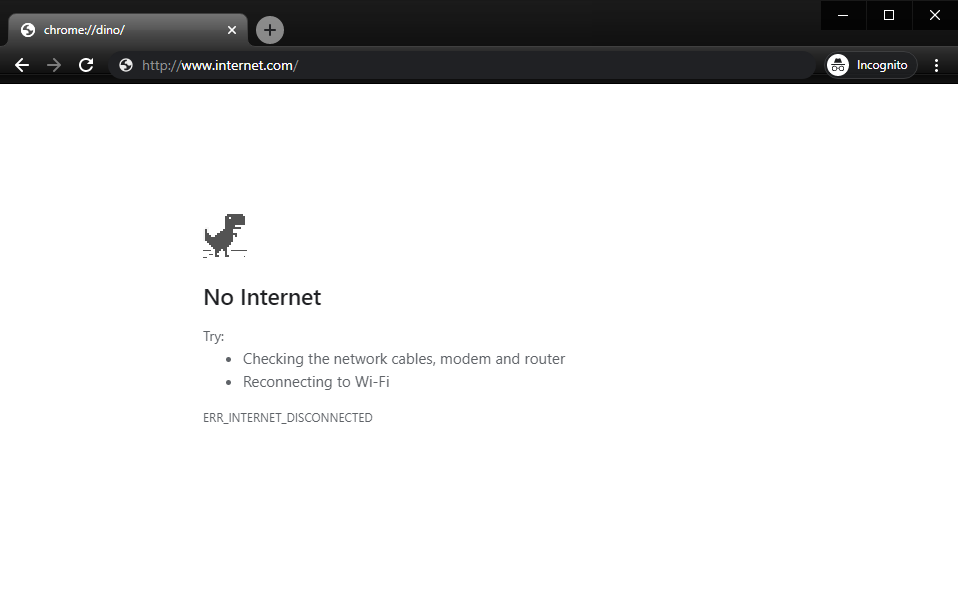 You’ve probably seen this screen a few times… maybe you’ve been on your phone on the train and you’ve travelled into an area with no signal, maybe your home wifi has died again… or maybe you went for a nice long walk in the countryside and realised too late that the countryside is actually quite big, most of it doesn’t have terribly good mobile phone signal, and Google Maps doesn’t work if you don’t have signal. In any case, you’ve had to figure out how to survive Without The Internet for a spell. We know it is theoretically possible to survive Without The Internet because apparently human beings did it for, well, most of history… but hey, just because you’ve got no 4G is no reason to go back to the cretaceous period… or is it?

You see, the “No Internet” screen built into Google Chrome, and in most other browsers that use the Chromium browser engine, has a little picture of a dinosaur as a sort of in-joke about life without internet being prehistoric. But you might not have known that there’s actually an entire game hidden in there… try it! You could disconnect from wifi, but you’re reading my blog, so that would be a really bad idea. Instead, try browsing to chrome://dino/, press Space (or tap the screen if you’re on a touchscreen)… and away you go!

Run merrily through the desert, jump over the cacti, avoid the pterodactyls… like Space Invaders and Tetris, the gameplay is incredibly simple but remarkably well-balanced and it’s surprisingly easy to get hooked on it. Especially if you’re stuck on a train that’s in a tube tunnel waiting for a vacant platform at Liverpool Street (y’all do remember trains, right?)

Check it out at chrome://dino/, or just wait for the internet to go down. It’s on most Chrome-based browsers, and it’s also built into Chrome for iOS, even though Chrome on iOS devices is actually a Chrome wrapper around the Safari rendering engine. Have fun, and watch out for the absolutely wonderful expression of stunned surprise on the T-rex’s face when he gets hit right in the unfortunates by a low-flying pterodactyl. It’s delightful.

And to think people say there’s no character development in computer games.