I don’t do New Year‘s Resolutions at New Year. January 1st is a terrible day to start anything important. I generally kick off new things at the start of February, and perhaps line up another project or resolution or two to kick in at the end of March when the clocks change. This time last year, I started my own company, Ursatile. I had a business plan and everything – but, as Mike Tyson memorably put it, “everybody has a plan until they get punched in the mouth”…

Yeah. 2020 was definitely a metaphorical punch in the mouth. Compared to a lot of people, I had it pretty easy: I already had a proper office set up at home, I didn’t have to worry about losing my job, I don’t have any kids to home-school. But I had to figure out, fast, how to make my new company viable in the new world of online events and remote working. For a while, I was running three online events a week, just to give us all a chance to try things out, figure out how online events worked, and what we could expect from them, and on the back of that, NDC hired me for a few months to help translate their developer conferences into online events. At the same time, I was developing my own workshops and online courses, giving talks at dozens of online events, and spending a small fortune on cameras, microphones and lights - some of which became instantly indispensable; some of which went into the cupboard within 24 hours and never came back out. By the end of last year, I’d racked up something like 50 days of online teaching, and lost count of how many online conferences and meetups I’ve spoken at. I’ve done online concerts, online quizzes, online panel shows – I even got a couple of bookings to do the entertainment at online Christmas parties, which turned out to be a lot of fun. And I rounded out the year with a live streamed online party show – two hours of music, comedy, greenscreen effects, special guests and festive entertainment, which was also a lot of fun.

But for me, the biggest revelation of 2020 was how well programming workshops work online. Hands-on, deep-dive technical training, with all the attendees writing and running code throughout the workshop. I’ve run my Introduction to Distributed Systems workshop online several times now, and it’s been absolutely excellent. Instead of being in a conference room, hunched over laptops and struggling with bad hotel wi-fi, everybody’s at home, with their dual monitors and their favourite mechanical keyboard; everybody’s running code on their own workstation, we’re connecting to cloud services and passing messages and requests between us. A day is long enough to build a working prototype; two days is long enough to turn the prototype into something you could actually use - monitoring, security, logging, integration tests. We build the whole thing, line by line, and as we go, I explain how it all works and why it’s built that way: what’s a subscriber ID, and why does it matter? What do those magic numbers in the proto file mean? What happens if one of those services fails?

It’s a great way to teach programming, and it’s a format that works really well for online workshops – and so, for 2021, I’ve put together several new workshops that are specifically designed to teach online. Lots of coding, lots of collaboration; things it would be impractical – or impossible – to do in a classroom.

I’ll be posting details of all these new workshops over the next few days, so keep an eye out for that. 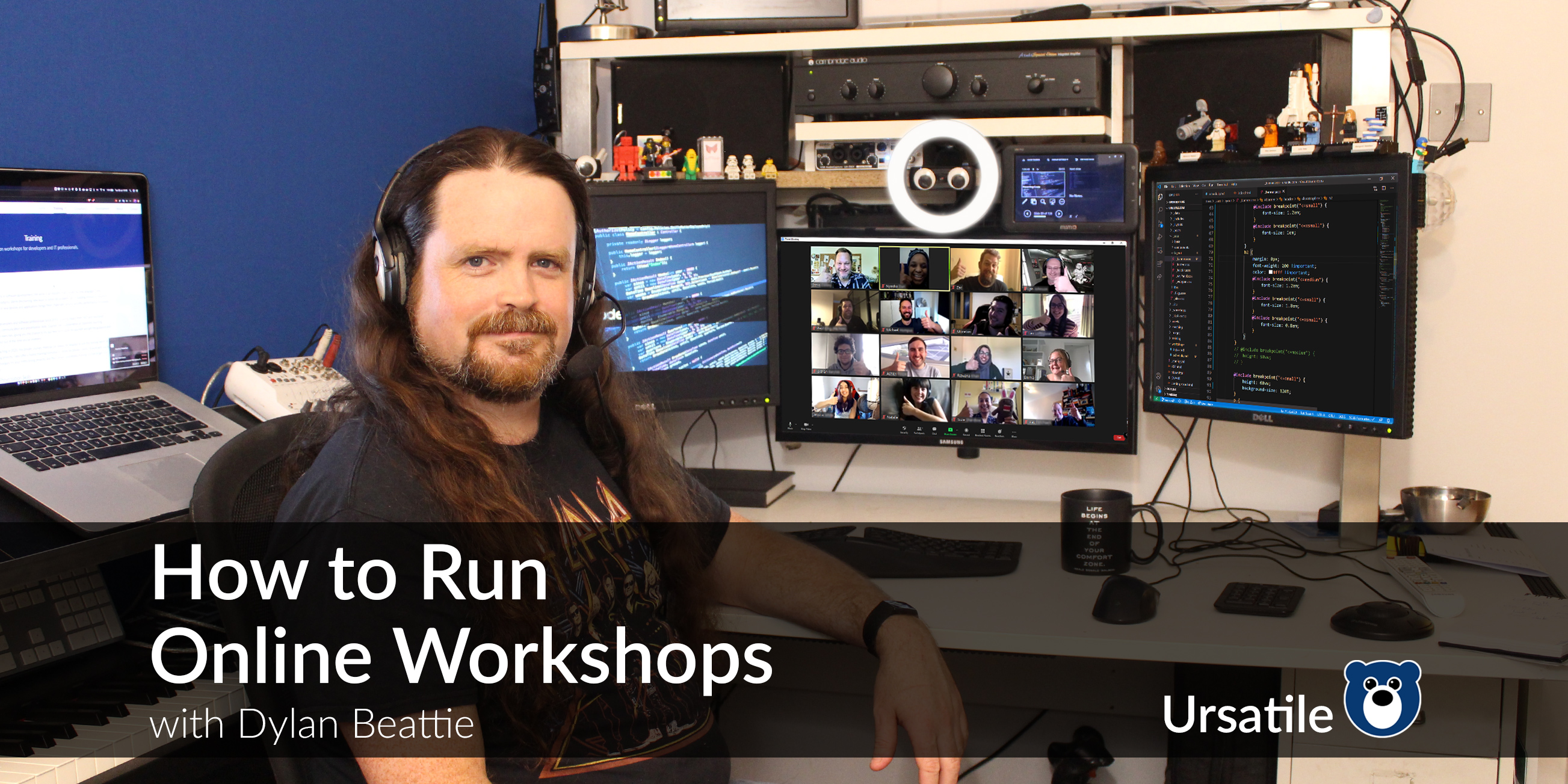 I also created a workshop last year about how to run online workshops, which proved really popular and had great feedback from everybody who attended it, so I’m going to be running that regularly throughout 2021 as well. It’s a half-day, hands-on workshop, four hours or so, covering everything from how to set up your mic and webcam to using online tools like Miro and Jamboard to run remote training courses, collaboration and design sessions. Dates are on sale now for February and March; find out more at https://urs.tl/htrow.