Back in August last year, I migrated this site, including 12 years worth of blog posts, from Blogger to Jekyll, primary so that I could host it on Github Pages. At the time, my main system was a Macbook Pro running macOS, I was doing a lot of work with Ruby and had a full Ruby dev environment set up, so running Jekyll locally was trivial.

I’ve recently switched back to Windows as my main OS, and Windows is still very much a second-class citizen in the wonderful world of Ruby web development. It’s a lot better than it used to be, and almost everything now works out of the box, but because the vast majority of Ruby devs (and sites) are running on macOS or Linux, Windows still isn’t quite as slick, or as fast, when it comes to running tools like Jekyll.

But this is 2020, and that doesn’t matter, because you can run Linux on Windows! Thanks to the Windows Subsystem for Linux (WSL), you can boot a full Linux kernel environment on your Windows PC and run native Linux apps and toolchains. I’ve been running Jekyll under WSL 1 for a long while to run my sites locally, and it works great, but it’s a little slow; spinning up a local copy of this site would take around 30 seconds, compared to 10–12 seconds on my old Macbook Pro.

I’d heard good things about performance improvements in WSL2, so last night I took the plunge, enabled the Windows Insider Program on my main PC, and ran a rather hefty Windows Update. 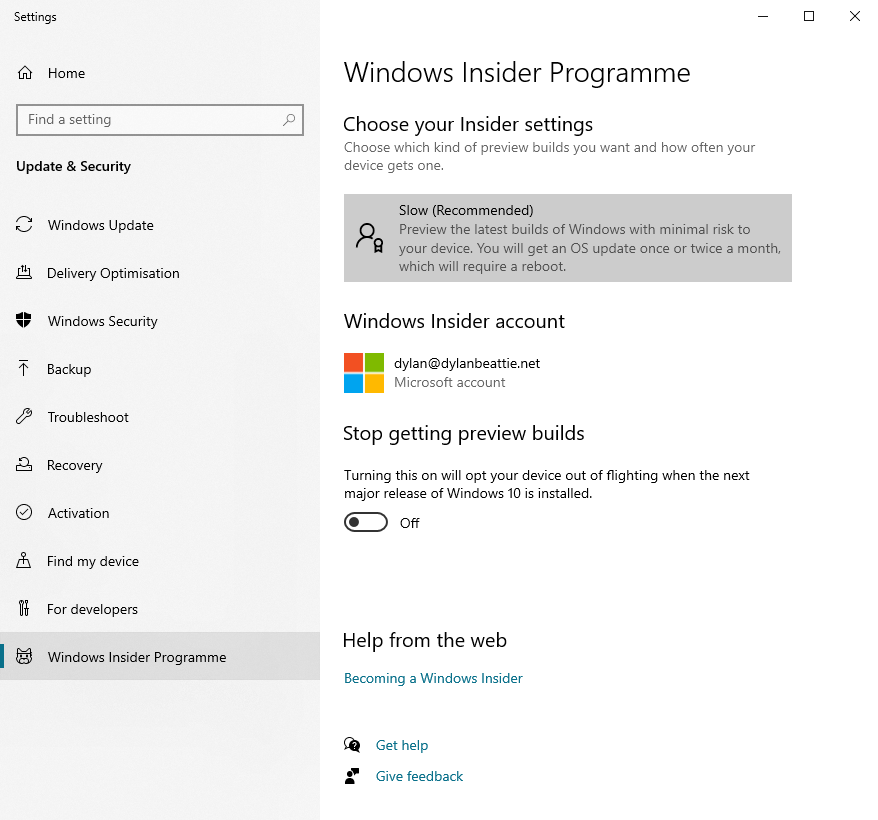 Now, by way of establishing a baseline, here’s running bundle exec jekyll serve on WSL 1. This is what I’ve been using to run my site locally and test things for the past few months.

30 seconds to build the site from scratch. Not great, not terrible.

This is on a the Ubuntu-20.04 LTS Linux kernel that’s available from the Windows Store. Having upgraded Windows 10 to the 2004 build, I could now upgrade this in-situ to use WSL2 instead of WSL1:

Ooh. Shiny. OK, let’s see what this thing can do:

155 seconds. Gosh. That’s… not quite what I was expecting, and certainly not something I’d claim was a “performance improvement”. So I did a little digging, and found this article from scotch.io, which includes a “Gotchas with WSL 2” section that specifically says:

To take advantage of all the new speed improvements in WSL 2, our files will need to be moved into the Linux filesystem.

Until now, I’d just kept everything on my Windows D: drive and used /mnt/d/ under WSL to run everything. Apparently that’s not a good idea any more… so I did a fresh git clone of my blog code into ~/dylan/github/dylanbeattie.net/ under WSL2 and ran it again:

For the sake of comparison, running the same thing natively on Windows, using the Windows distribution of Ruby 2.6, takes about 21 seconds:

And having got this far, I couldn’t resist running two more tests just to round the whole thing out. First, the same thing but on a full Ubuntu 20.04 desktop VM running under HyperV:

That’s 2.45 seconds – marginally slower than the WSL2 version with the native FS. And finally, just for the hell of it, here’s the Windows native port of Ruby and Jekyll, against the repo checked out onto the Linux native FS, mounted as a network drive in Windows:

Here’s how the six different scenarios end up:

I was genuinely surprised at the orders of magnitude of difference seen here. I expected a factor of maybe 2-3 times – I did not expect the slowest (albeit rather silly) option to be nearly 300 times slower than the fastest. But clearly whatever the WSL team has done in WSL2 has made a substantial difference when it comes to performance – as long as you’re working with a native Linux filesystem.

Usual caveats apply, that one guy running one Jekyll site and writing a blog post about it is not a rigorous scientific analysis. I did this because I wanted to work out what solution worked best for my specific scenario. Your mileage, as the saying goes, may vary. But it’s definitely worth trying out a few different options and seeing what works best for your particular workload - and hey, when you do, publish the results. I’m curious to see just how good WSL2 is across different scenarios, but early indicators are it’s very, very good indeed.