It’s March 2020 and everything is cancelled. COVID-19 has been declared a pandemic by the World Health Organisation, Norway is closed, Italy is closed, the US has banned travel from most European countries, and the British government is, um, advising us to wash our hands while singing songs until we develop “herd immunity”.

With many countries now banning all large public gatherings, this has obviously hit IT conferences and community events hard. Within the last 24 hours, NDC Conferences has announced that their forthcoming events in Copenhagen, Porto and Oslo will be virtual online events; JUG.RU - the largest conference organiser in Russia - has postponed all of their forthcoming events until later in the year; local groups are switching to running virtual online meetups, and we’re generally all trying to figure out how to make the best of a pretty rough situation.

We’ve all done remote conference calls – and a lot of the time, they suck. A bunch of bored people dialled into a Slack call or something but not really paying attention; glitchy video, distorted sound. But if we’re all going to be working from home and running virtual meetups for the next three months, we probably need to figure out how to make things better.

Earlier this week, the London Women in Agile group switched their regularly monthly meetup to a be a virtual online event. I joined as a participant and was absolutely blown away - it was orders of magnitude better than any video conference or remote meeting I’ve ever seen before. This was partly thanks to the speaker, Judy Rees, who in a stroke of serendipity was actually talking about how to have difficult conversations with remote teams – but who also brought a wealth of experience and expertise about how to actually run a large online meetup. The meetup was run over Zoom, and Judy used features like breakout rooms to mix up the format and keep people engaged - and it worked brilliantly.

I came away from this meeting - or rather, disconnected from the call - thinking that there’s clearly a lot more to modern video conferencing platforms than I realised, and I’m sure I’m not the only one. So earlier today I organised a virtual online lunch - put links up on Twitter, Facebook and a couple of Slack groups I’m in, just asking if anybody wanted to hang out on Zoom and eat lunch together and play around with the capabilities of the platform… 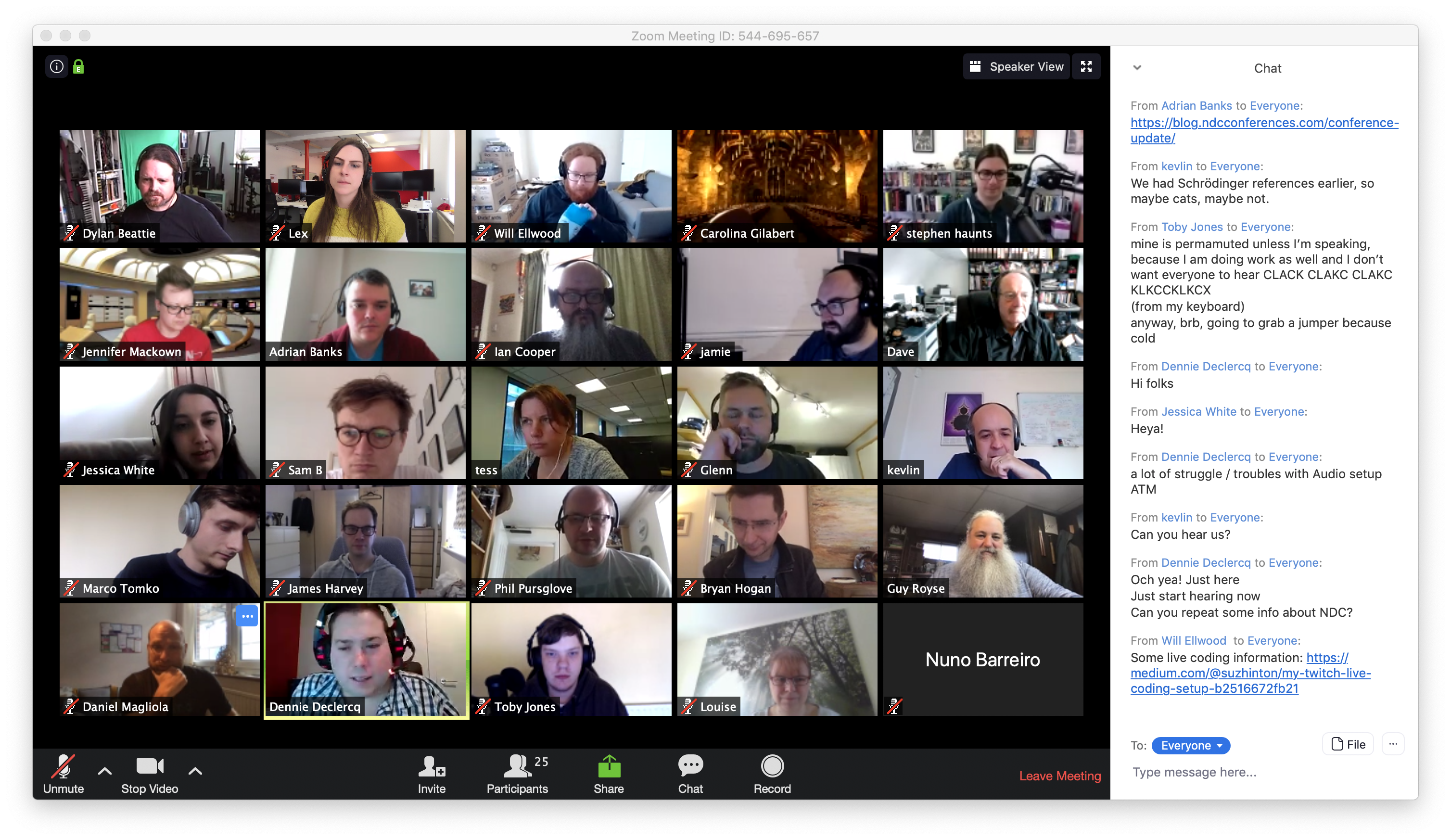 It worked great. Not perfect, but very, very good. I think everybody on the call saw a couple of new features they’d never seen before - the great thing about this kind of informal session is you can goof around and explore things; we were playing with virtual background, screen sharing, sharing jokes and links in the chat, folks helping each other figure out microphone muting settings and howto get stuff set up properly. And it was also a lot of fun - at the busiest point I think we had 32 people simultaneously online, and the platform handled it all pretty well.

Some specific things to think about:

On the whole, it worked really well… so I’m going to do more. I’ll be using Zoom to run regular online lunches, drinks after work, that kind of thing – partly to give more people a chance to experiment with Zoom in a friendly context, but mainly because it’s just nice chatting to people in real time. (Yes, this means another hour or two of staring at screens instead of going outside… but hey, maybe outside isn’t all it’s cracked up to be…)

I’m also going to be running some experiments with virtual online events, to try out different formats and tools. A lot of big events this year are switching to virtual-only, and obviously a virtual event is never going to be the same as a physical one – but it’s also a chance to connect with a lot of folks who wouldn’t be able to attend the physical conference in person anyway. Besides, a lot of the people expressing reservations about virtual conferences are the same people who will happily spend hours playing Zelda or Minecraft, or sitting watching Netflix and then chatting about it on Twitter. It’s not the medium, it’s the content.

Wanna help us? We’ll be doing experiments, with Zoom and Twitch and YouTube and OBS and Slido and TwistCam. We’ll be fooling around with greenscreens and virtual slides. We’ll be running virtual meetups and online sessions, and we need content, we need participants, we need audiences who will honestly tell us all what works and what doesn’t, and bear with us while we figure all this out. If you want to participate in any of it, get in touch - email me, find me on Twitter, join my new Ursatile Slack team (yay another Slack! Just what you always wanted!) and get involved. Stock your fridge with snacks and drinks, figure out how to tether your phone in case your broadband goes wonky. Get a decent headset microphone - the mic built in to your laptop is not good enough for this, but even a pair of £15 earbuds with a cord microphone is probably good enough.

Oh yeah, and don’t forget to wash your hands.