About That Meetup.com Announcement

Remember: everything on this site, including this post, is my personal opinion, and does not reflect any official position of either Skills Matter or of the London .NET User Group. 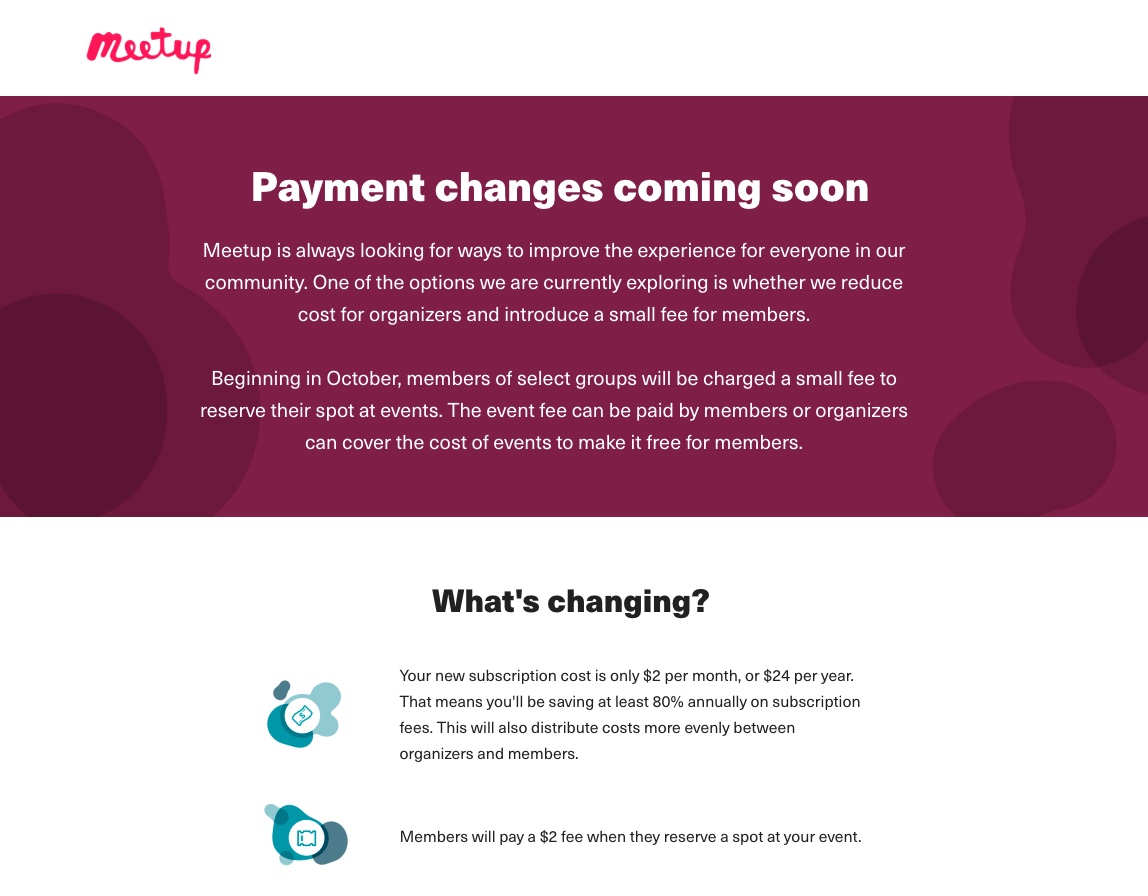 The online community platform Meetup.com (hereafter known simply as Meetup) has just announced that “beginning in October, members of selected groups will be charged a small fee to reserve their spot at events”. (archive.org link) From the phrasing of their announcement, it sounds like Meetup will be charging people a $2 fee to register to attend an event – even if the event is free – and that 100% of that revenue will go to Meetup and none of it is passed on to the event organisers.

I’ve organised a .NET meetup group in London since 2016. Since 2018, I’ve also been CTO at Skills Matter, a company based in London that hosts hundreds of free meetups and tech events every year. That’s given me some fairly unique insights into the relationship between the Meetup platform, the people who organise and attend free community events, and the logistics behind running a free event.

Meetup is an odd platform. It’s a lowest common denominator, that’s used by songwriting clubs, running groups, coffee mornings and book clubs, as well as the tech meetups that we all know and love. And over the last few years, they’ve made changes to that platform that’s made it harder to run a tech meetup on their platform. For example, they’ve deprecated their rich text editor in favour of a minimal plain-text interface that makes it much more difficult to include speaker biographies and photographs in an event description.

Many people also aren’t aware that group organisers have no access to our group members’ contact information. They provide tools that let us contact attendees by email, but there’s no way to download a list of members’ email addresses. And it costs. The London .NET User Group is part of the .NET Foundation, which means they pay our subscription costs, but even running free events on their platform costs $19.99 per group, per month.

As a technology platform, it’s not great. It has mediocre usability and a very limited feature set. We can’t share slides or videos. There’s no way to share feedback with our speakers. There’s no facility for attendees to share their dietary requirements. There’s no sort of statistical modelling or forecasting to give organisers some idea of how many people will actually show up – I know of people in the LDNUG group on Meetup who have RSVPed ‘yes’ to every single event since 2016 and have never actually showed up to one, but it will still quite happily list them as ‘attending’ every single time, so good luck figuring out how much beer and pizza you’re going to need on the night. Patricia Aas very neatly summarised it thus:

This is basically three things:
1) A mailing list
2) A RSVP/waiting list
3) An event page @Meetup does none of these things well and already is way too expensive...

But we still run London .NET on Meetup, and here’s why. When I announce one of our events on Meetup, I know I’ll get 50-100 RSVPs within 48 hours. If it’s a well-known speaker, I’ll get more like 200. And around 20% of those RSVPs will be complete strangers – people who have never been to one of our events before, who aren’t on any of our Slack chats or following us on Twitter. The only way those people even know that our event is even happening is that they found it on Meetup – and Meetup is so dominant in this space that if your event’s not on Meetup, it may as well not exist.

The recent announcement here about charging attendees to register is interesting. Now, $2 is not a big deal for tech events – here in London that’s significantly less than a cup of coffee. And I wouldn’t be surprised if it’s part of some long-term strategy by Meetup to pivot to a subscription model by jacking the prices up now, and then offering a subscription model in a few months time that looks very reasonable by comparison (“Hey, check out Meetup Unlimited – only $5/month to register for as many events as you want!”). After all, Meetup is owned by WeWork, who are losing vast amounts of money right now and probably desperate for revenue; I suspect if you took a look at their business plan, free meetup attendees are listed under ‘stuff that doesn’t make enough money’. There’s a great write-up by Quincy Larson, the founder of freeCodeCamp.org, about this as well.

But the impact of that change, from free to $2, is far more psychological than financial – and that’s why it might be a game-changer. The announcement has already inspired people around the world to start working on their own version of Meetup – I’m on a Discord channel right now where the FreeCodeCamp folks are coordinating one such solution, and over 100 people have joined that channel in the time it’s taken to write this post. Only time will tell whether this is a flash in the pan or genuine critical mass, but their solution is called Chapter, it’s over at github.com/freeCodeCamp/chapter, and it’s definitely worth keeping an eye on.

Now, I love the way the tech community rallies like this around an opportunity – but we really don’t need a dozen different open-source codebases hosted on hundreds of isolated websites, each of them running a handful of local groups. And when you get into mobile apps, where you can’t just spin up a Docker container and import your data, the fragmentation problem is even more pronounced. The problem that Meetup solves is not a hard technical problem. It’s a social problem. If people can’t find your group, nobody’s going to come to your event.

That’s not a problem you can solve with database schemas and JavaScript frameworks. Sure, tech plays a role here – but if there’s one thing we can all learn from Meetup, it’s that mindshare and user adoption are way more important than features and design when it comes to growing user groups, events and communities. People will put up with poor usability and terrible design if it connects them to the right people – and if it doesn’t, there’s no amount of shiny technology and beautiful UX that’s going to make up for it.

I’ll be really interested to see what happens next.