Summer here in the UK is normally pretty quiet, but this year there's so much going on around .NET and the .NET community that I thought this would be a great opportunity to do a bit of a round-up and let you all know about some of the great stuff that's going on.

First, there's the news of two new .NET user groups starting up in southern England. Earlier this week, I was down in Bournemouth speaking at the first-ever meetup of the new .NET Bournemouth group, and thoroughly enjoyed it. Three speakers – Stuart Blackler, Tommy Long and me – with talks on leadership, agile approaches to information security, and an updated version of my "happy code" talk I've done at a few conferences already this year. The venue and A/V setup worked flawlessly, there was a strong turnout, and some really good questions and discussion after each of the talks – I think it's going to turn out to be a really engaging group, so if you're in that part of the world, stop by and check them out. Their next few meetup dates are on meetup.com/Net-Bournemouth already.

Next month, Steve Gordon is starting a new .NET South East group based in Brighton, who will be kicking off with their inaugural meetup on August 22nd with Steve talking about Docker for .NET developers.

There's a great post on Steve's blog explaining what he's doing and what he's hoping to get out of the group, and they're also on meetup.com/dotnetsoutheast (and I have to say, they've done an excellent job of branding the Meetup site – nice work!)

It's an exciting time for .NET – between the cross-platform stuff that's happening around Xamarin and .NET Core, new tooling like JetBrains Rider and Visual Studio Code, and the growing number of cloud providers who are supporting C# and .NET Core for building serverless cloud applications, we've come a long, long way from the days of building Windows Forms and databinding in Visual Studio .NET. 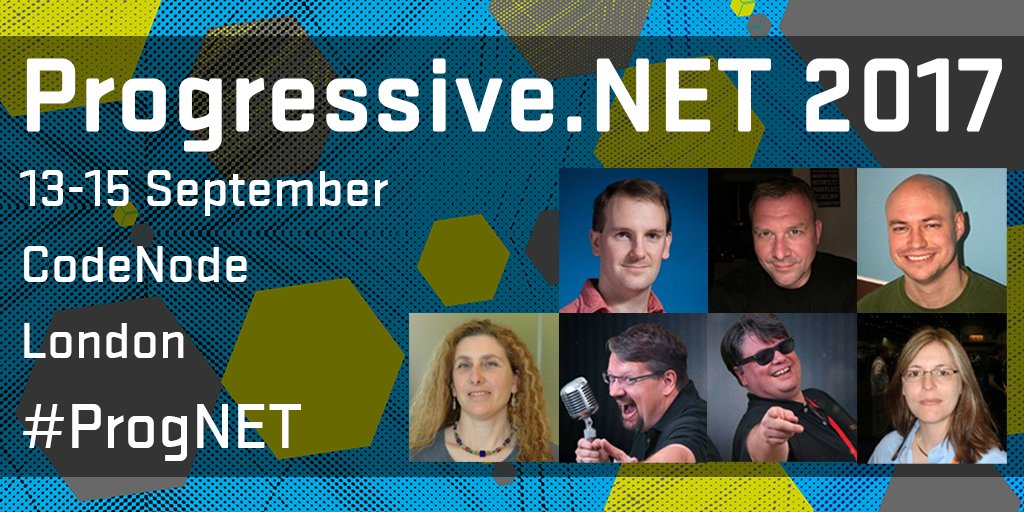 If you're interested in really getting to grips with the future of .NET, join us at the Progressive.NET Tutorials here in London in September. With a great line-up of speakers including Julie Lerman, Jon Skeet, Jon Galloway, Clemens Vasters and Rachel Appel – plus Carl Franklin and Rich Campbell from DotNetRocks, and a few familiar faces you might recognise from the London.NET gang – it promises to be a really excellent event. It goes a lot deeper than most conferences – with one day of talks and two days of hands-on workshops, the idea is that attendees don't just go away with good ideas, they actually leave with running code, on their laptops, that they can refer back to when they take those ideas back to the office or to their own projects. Check out the programme, follow #ProgNET on Twitter, and hopefully see some of you there.

Then on Saturday 16th September – the day after Progressive.NET – is the fourth DDD East Anglia community conference in Cambridge. Their call for speakers is now closed, but voting is open until July 29th – so sign up, vote on the sessions you want to see – or just vote for mine if you can't make your mind up ;) - and hopefully I'll see some of you in Cambridge.

Finally, just in case any readers of this blog DON'T know about the London .NET User Group… yep, we have .NET User Group! In London! I know, right? We're on meetup.com/London-NET-User-Group, and on Twitter as @LondonDotNet, and we meet every month at SkillsMatter's CodeNode building near Moorgate.

Our next meetup is on August 8th, with Ana Balica talking about the history and future of HTTP and HTTP/2, and Steve Gordon – and on September 12th we've got Rich Campbell joining us for a Progressive.NET special meetup and presenting the History of .NET as you've never heard it before.

New people, new meetups, new platforms and new ideas. Like I said, it's a really exciting time to be part of the .NET community – join us, come to a meetup, follow us online, and let's make good things happen.