It Works On My Machine!

I saw on Twitter this morning that Derick Bailey is looking for people to share their own “works on my machine” stories… and halfway through filling out his survey, I decided this would probably be much more fun if I nicked his survey questions and turned them into headings in a blog post. Mainly ‘cos writing for an audience appeals to me far more than filling out survey – but Derick (and anyone else who cares?) is very welcome to use anything in this post as part of their own research.

What's typically going through your head when you say "works on my machine" to a QA person or another developer?

I think the interesting question here is actually – what did somebody say to you that caused you to respond with “it works on my machine?”

Q: This code throws an exception when we run it on the staging environment…
A: It works on my machine.

Q: How are you getting on with that improvement to the search algorithm?
A: It works on my machine.

Q: Did you get anywhere with that really weird solution to the mapping problem that Chris found on StackOverflow?
A: It works on my machine…

See how in each case, there’s a sort of implicit subtext? See, I think we all understand that there’s often quite a big difference between solving a problem and delivering a solution. In almost all development scenarios, the first step is to get the code you’re working on running locally and doing the right thing on your development system – and often to do that, we have to hack things around. Running web servers as a local admin user. Granting “Everyone Full Control” of all the files in the media folder. Manually tweaking registry keys, installing DLLs, reusing credentials for APIs and external services – there’s a whole lot of stuff that has to happen as well as just writing some code, but most of the time, the code is the focus and the rest just feels like friction.

So… to answer the original question, when I tell somebody something works on my machine, I’m thinking “ok, what else, other than my own code, do we need to do to deploy the solution, close the ticket and move on?” When you’re working on spikes and prototypes, that’s a natural part of the conversation. If you’ve submitted a ticket to QA for final pre-release testing and it doesn’t work, there’s naturally a bit of tension because implicit in the conversation is the fact that somebody thinks you haven’t done your job properly – and “well it works on my machine” can come across as defensive.

Can you share a story about a time when you have said, or thought, this?

Ah, dozens. The most common example for me is when I’m making a change that spans code in 4-5 different projects, so I’ve checked them all out… in one project I’ve added a database column, in another there’s some new HTTP request routing, in the third there’s a new message queue subscriber, and then there’s the new feature code that relies on all of those changes to work properly. And it works on MY machine because locally I’ve already made all of those changes, but it get it working anywhere else, all five projects need to be reviewed, built, packaged, configured and deployed onto the same environment. Or, for another developer to work on it, they need to check out five specific branches from five specific projects and then probably run a couple of configuration scripts as well – and there’s invariable one or two little things that didn’t require any explicit configuration on my own workstation but then it turns out your teammate has enabled WebDAV publishing under Windows Programs and Features and so their IIS configuration isn’t the same as yours.

How do you typically feel when someone says, "works on my machine," to you?

First off, I’m happy. See, I’ve worked with a very small number of developers who didn’t bother doing even this most basic validation of the work they were doing. They’d commit something, open a pull request and ask for a code review, and you’d look at what they did and think “that’s a bit weird”, so you’d wander over and say “hey, can you show me how this feature works?” – and they will actually say “I don’t know, I can’t run that project”.

“Works on my machine” at least indicates that they’ve got all the code checked out, they’ve compiled it, and they’ve actually got it running. That’s a good start. That’s something you can work with. And at that point, it’s a great opportunity to explain things like configuration management or deployment scripts.

Can you share a story about a time when someone said this to you?

We had a problem a few weeks ago where we ported an old project from VS2010 to VS2015, and TeamCity wouldn’t build it properly. An absolute textbook example – another developer comes to me and says “well, it works on my machine; it builds fine and I can run all the tests, but TeamCity won’t run any of the unit tests and so the build keeps failing.” Turned out to be a rogue wildcard somewhere in the TeamCity build config settings that was causing it to pick up unit test DLLs from the \obj\ folders instead of \bin\. Which, of course, doesn’t happen when you’re running tests using Resharper or NCrunch, because those tools are smart enough to understand path conventions.


What are the 3 largest causes of someone saying "works on my machine"?

In my experience? The biggest one is dependencies between multiple projects. The “feature”, the unit of business value we’re trying to deliver, requires changes across several different projects and so those changes need to be coordinated and deployed together in order to run and test the new feature, and it’s very easy to miss a step when you’re trying to capture and package all of those code and configuration dependencies.

Third? Probably data. Lookup tables, test records, and code that’s brittle because it depends on specific records existing in a particular state, and when you check out the code it doesn’t include the migration steps or SQL scripts that are necessary to set up those records.

Actually, I’m going to go for four, because the one that bites me all the time – probably once a week – is that when you add a new file to a Visual Studio solution, it doesn’t save the .csproj file by default. The new file gets added to the repo and pushed up to GitHub, but the project reference to that new file still only exists on your local machine. Sometimes it’ll crash the build; sometimes – if it’s an image or a script file or something – it’ll build, pass tests, deploy, and then fail on the test server because the new file isn’t included in the .csproj and so wasn’t included when the deployment package was built. If you think your organisation doesn’t have this problem, search your GitHub repo for commit messages including the phrase “csproj file”…


How do you combat the "works on my machine" problem?

There’s a couple of things that have definitely made a big difference to our team at Spotlight. One is setting up an internal NuGet server (we’re running Klondike), and making sure that if your project code references DLLs or any other static components, those dependencies are managed as NuGet packages. That way the first time you build the project, it’ll download all of those obscure DLLs for you instead of waiting for you to get an error message, look it up on the wiki, etc.

One is giving everybody the ability to build and deploy pre-release packages. We have TeamCity and GitHub configured so that as soon as you open a pull request, TeamCity will try and build a deployable package based on the merge head of your feature branch. This means you, the developer, can get packaged builds of your work in progress, deploy it onto one of our testing environments and see for yourself whether it’s going to work or not. Which means you get the chance to fix the bugs and configuration problems before passing it on to anyone else to review or test. 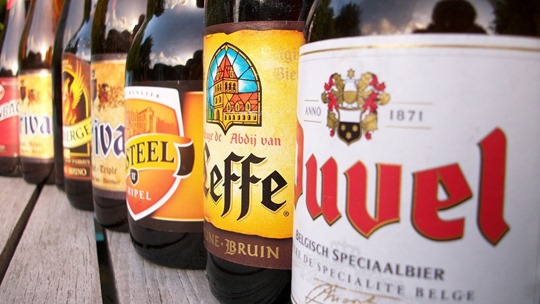 Oh, and we have something called escrow beers. If you want to introduce a new tool, dependency, language or something into one of our projects, you have to put a six-pack of beer (or a box of cookies or something similarly delicious) in escrow, in the kitchen. Put a post-it note on it saying what it’s for – and then when some poor developer is working late to get a feature out and they discover that they need to install grunt or gulp or bower or yeoman or FAKE or PSake or whatever, there’s goodies in the fridge that will help. That’s doesn’t necessarily inhibit the adoption of new tech, but having to go out and buy beer or cookies makes people stop to think about how their changes might affect their teammates, and so they’ll add some checkout scripts to get the new thing working, or document it on the wiki, or organise a demo to show everyone what they need to know. It's also funny how often somebody thinks a new tool or language is ABSOLUTELY TOTALLY AMAZING and there's no way we can possibly live without it… except it's not actually quite amazing enough to justify walking to a shop at lunchtime and buying a box of cookies.

So there you go… more than you ever wanted to know about code that works on my machine. Thanks again to Derick Bailey for the idea – and just to be clear, you’re welcome to use it, and please credit me by name if you use the information provided here in any follow-up posts or other material.