Why I’m Voting to Remain in the European Union.

There's a referendum coming up. I'm not going to talk about why it’s happening. I'm not going to share any “facts” about politics or the economy, beyond a few historical details that are the basis for my opinion on this. But I am going to tell you why I'm voting for the UK to remain in the European Union.

I live in London. I’m British, though I grew up in Africa. I’ve never been much of a patriot, although I’ll confess to the odd surge of pride when it comes to Pink Floyd, the BBC and Thrust SSC. I’ve spent most of my adult life working in software development, and I'm lucky enough to work with an outstanding team of people – some of the brightest, smartest people you'll ever meet. More than half of our development team are EU citizens who are living and working in London thanks to the UK being part of the EU. I love working with these people, and there's numerous studies supporting my own anecdotal experience that working with people you like is a massive factor in how happy you are. And, like many Londoners, my friends are a motley assortment of people from all over the world, and a lot of them are here as citizens of the EU. On a very immediate level, it would really suck if they all had to either leave the UK or go through the merry hell of applying for permanent leave to remain, and potentially have to choose between their native citizenship and becoming British citizens. But that's both a very personal and a very temporary thing. I’m sure we'd all get over it eventually.

In the last year, I've been lucky enough to visit Lithuania, Denmark, France, Belgium, Norway and Ukraine. France and Belgium were founder members of the EEC, the predecessor to the European Union. Denmark and the UK joined in 1973. Lithuania, part of the USSR until 1991, became a member of the EU in 2004. Norway is a bit special, but it is a part of the European Economic Area and the Schengen visa area. Ukraine has gone, within my lifetime, from being part of the Soviet Union to winning the Eurovision Song Contest. Ukraine borders four EU member states (Romania, Hungary, Poland, and Slovakia), and whilst I don't think it will be admitted as a member of the European Union any time soon, the prospect of closer integration with the EU is a huge factor in Ukrainian politics. Whilst the UK was gearing up for a referendum about whether to leave the EU, two hundred thousand Ukrainians were marching through Independence Square in protest at their government's failure to sign a trade agreement that would have represented one small step towards eventual EU membership. I've visited all these countries without applying for a visa. I've spent time in these remarkable places with friends and colleagues from all over the world.

In Oslo, there is a museum dedicated to the great Norwegian explorer Thor Heyerdahl, who dedicated his life to the study of human migration, researching the astonishing stories of people who crossed Earth's vast oceans on flimsy wooden boats in search of a better life. This wanderlust, the urge to venture beyond our comfort zone, is as old as humanity. Along one wall is a quote from Heyerdahl:

“Borders - I have never seen one. But I have heard they exist in the minds of some people.”

He's right. Borders aren't physical things. Sure, some of them run along coastlines and rivers, but that's not the point. Borders are where, once upon a time, we drew a line in the sand and agreed that as long as your lot stayed on your side and our lot stayed on our side, it would be OK if maybe we stopped killing each other for a bit. And, slowly, as we learned to put down the pointed sticks and talk to each other instead, the world has changed. We can cross those borders now. We can live, work and study abroad. We can make friends, fall in love, start families, start businesses. Fifty years ago, someone from Birmingham falling for someone from Bucharest would have been a Pulitzer Prize-winning novel. Today it's just one more data point on Tinder (Or Grindr, depending who's playing.)

And that's why this matters to me. The impact of next week’s referendum will last for generations. It isn't about the petty power struggle between David Cameron and Boris Johnson. It isn't about Jeremy Corbyn or UKIP or immigration or the "war on terror" or economic subsidies. It's about peace, and stability, and the opportunities that affords all of us. The author Charlie Stross captured perfectly my thoughts about this when he wrote:

"The EU is the current incarnation of an institution established in 1947 to ensure that never again would the nations of western Europe go to war with one another."

The European Union is the legacy of a group of nations who, still reeling from the horror and the bloodshed of World War II, agreed that whatever the challenges the future might hold, we would be stronger facing those challenges together. They believed, as I do, that a unified Europe represents a significant step on the road towards a better world for humankind. Next week, the UK goes to the polls to decide whether we want to step off that road or not. Whether we want to close our borders, lock our doors and go it alone. To me, this is tantamount to a decision about whether we, the citizens of the United Kingdom, believe that we deserve to prosper while others are suffering, and there's really only one way I can answer that question and still sleep at night.

Neither side is presenting a terribly cohesive argument. Speculation, scaremongering and misinformation are absolutely rife on both sides. Nobody knows what'll happen if we leave. Nobody really knows what'll happen if we stay. I'm not quite sure what "vote remain" are campaigning on, but from the leaflets I’ve been getting through my front door, it looks to me very much like the "vote leave" camp is campaigning on fear. Fear of immigration and poverty and hardship. Fear of terrorism. Fear of things which are a fact of life for billions of people around the world. I am not scared of these things, because I believe that if we work together, we can solve them, just as we brought lasting peace to the countries of western Europe after centuries of frequent, bloody conflict. Twenty years ago, most British people’s idea of a terrorist was an Irishman in a ski mask. Things can change, and they will.

That doesn’t mean I’m not scared. I'm scared that fear and misinformation are going to rule the day. I'm scared for my friends and colleagues for whom a "leave" result on the 23rd could have a real, immediate impact on their lives and livelihoods. I'm scared that, a century from now, some kid is going ask grandad how the war started, and he’ll tell them a story that starts with Brexit. If you don't think that's a possibility, consider that it's less than a hundred years since the Battle of the Somme - nearly a million British, French and German soldiers killed and wounded on the fields of northern France. No Islamic State, no al-Qaeda, no "war on terror" - just honest God-fearing white guys killing one another for the hell of it. Within thirty years, they'd do it all over again – nearly a thousand veterans of that conflict are still alive today.

Since the 1950s, the EEC, and later the EU, has grown from six countries to twenty-eight, and there has never been an armed conflict between two EU member states. And if you think that EU membership is expensive, remember that World War I nearly bankrupted the UK, and World War II saw us borrow so much money from the United States that we didn't finish paying them back until 2006. Peace is small potatoes compared to the cost of war.

Different people care about different things, and I respect that. Ask yourself what matters to you, research your position, and vote accordingly. Maybe even draw up a list of things you hope are going to happen as a result, so you can validate your assumptions a few years from now. But these are the things that matter to me, and I haven’t heard a single plausible argument that leaving the EU will improve any of them.

I believe that peace is more important than politics. I believe that the desire to travel in search of new ideas and new experiences is fundamental to what makes us human. I believe that open borders and common markets give us unprecedented freedom to explore the world we live in. I believe that membership of the European Union embodies all of these principles, and I’m voting to remain. 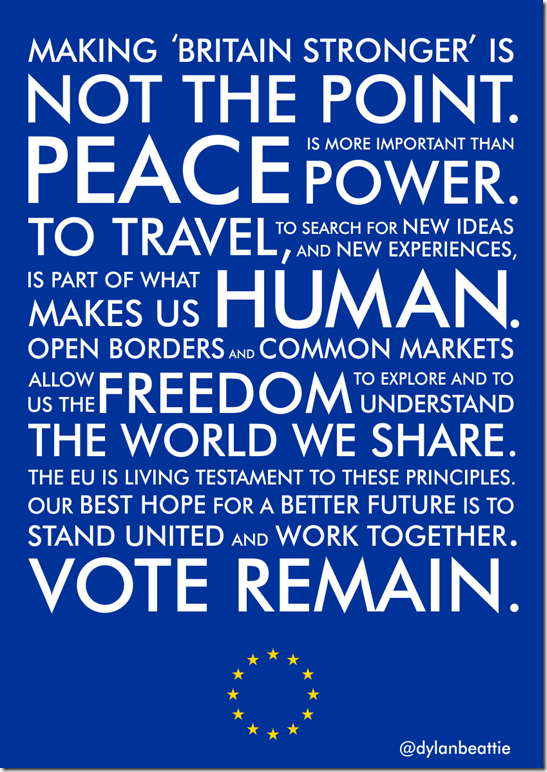