There’s been some really interesting blog posts about speaking at conferences recently – from Todd Motto’s “So you want to talk at conferences?” piece, to Basia Fusinska’s “Conference talks, where did we go wrong?” and Pieter Hintjens “Ten Steps to Better Public Speaking”, to Seb’s recent “What’s good feedback from a talk?” post. There’s a lot of very useful general advice in those posts, but I absolutely believe the best way to improve as a speaker is to ask your audience what you could be doing better, and that’s hard.

After most talks you’ll have a couple of people come up to you at the coffee machine or in the bar and say “hey, great talk!” – and that sort of positive feedback is great for your confidence but it doesn’t actually give you much scope to improve unless you take the initiative. Don’t turn it into an interrogation, but it’s easy to spin this into conversation – “hey, really glad you enjoyed it. Anything you think I could have done differently? Could you read the slides?” If there’s something in your talk which you’re not sure about, this is a great chance to get an anecdotal second opinion from somebody who actually saw it.

Twitter is another great way to get anecdotal feedback. Include your Twitter handle and hashtags in your slides – at the beginning AND at the end – and invite people to tweet at you if they have any comments or questions. In my experience, Twitter feedback tends to be positive (or neutral – I’ve been mentioned in lots of “@dylanbeattie talking about yada yada yada at #conference”-type tweets) – and again, whilst it’s good for giving your confidence a boost, it can also be a great opportunity to engage with your audience and try to get some more detailed feedback.

And then there’s the official feedback loops – the colored cards, the voting systems and the feedback app. I really like how  BuildStuff does this. They gather feedback on each talk through a combination of coloured-card voting and an online feedback app. Attendees who give feedback online go into a prize draw, which is a nice incentive to do so – and it makes it an easy sell for the speakers: “Thank you – and please remember to leave me feedback; you might win an iPad!” The other great thing BuildStuff does is to send you your feedback as a JPEG, which looks good and makes it really easy for speakers to share feedback and swap notes afterwards. Here’s mine from Vilnius and Kyiv last year: 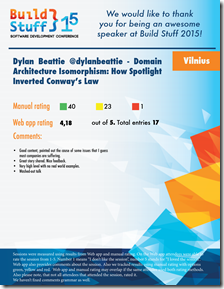 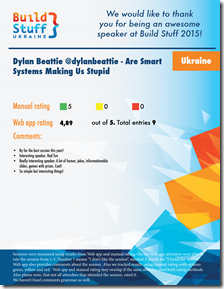 Now, I’m pretty sure there were more than five people in my talk in Kyiv – so I think something might have got lost in the transcription here – but the real value here is in the anecdotal comments.

Some conferences also run a live “leaderboard”, showing which speakers are getting the highest ratings. I’m generally not a big fan of this – I think it perpetuates a culture of celebrity that runs contrary to the approachability and openness of most conference speakers – but if you are going to do it, then make sure it works. Don’t run a live leaderboard that excludes all the speakers from Room 7 because the voting machine in Room 7 was broken.

Finally, two pieces of feedback I had from my talk about ReST at NDC London this year. The official talk rating, which I’m quite happy with but doesn’t really offer any scope for improvement:

And then there’s this, thanks to Seb, who not only came along to my talk but sat in the front row scribbling away on his iPad Pro and then sent me his notes afterwards. There’s some real substance here, some good points to follow up on and things I know I could improve: 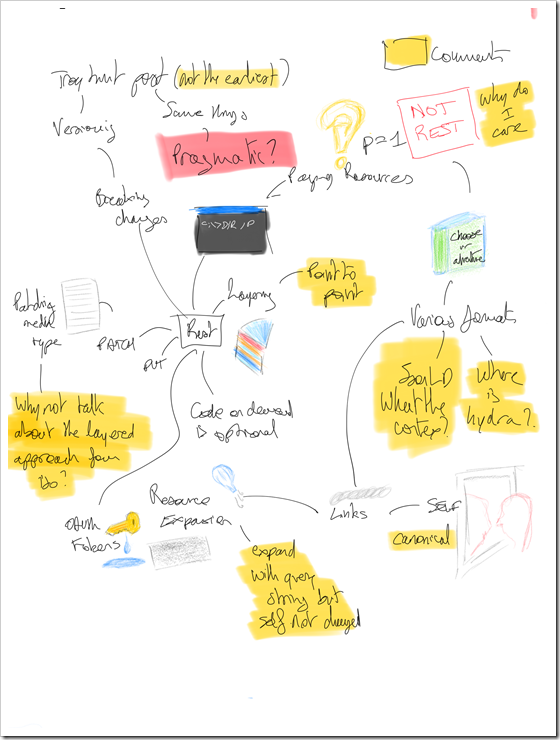 This also goes to highlight one of the pitfalls of doing in-depth technical talks – your audience probably aren’t in a position to judge whether there’s flaws in your content or not, so your feedback is more likely to reflect the quality of your slides and your presentation style than the substance of your content. In other words – just because you got 45 green tickets doesn’t mean you can’t improve. Find a subject matter expert and ask if they can watch your talk and give you notes on it. Share your slides and talks online and ask the wider community for their feedback. And don’t get lazy. Even if you’ve given a talk a dozen times before, we’re in a constantly-changing industry and every audience is different.