OK, having finally convinced those necrotic turbinates at Ubisoft that I'm not a dirty filthy pirate (yarrr!) I have an install key for Rocksmith. And I've installed it. And I've played it. Now, I'm not a gamer. I've played around with Guitar Hero and gone "meh"... But I have been playing guitar for 25 years and wasted more hours than I care to recall plugging assorted guitars into various kinds of computer gear to try and make them do interesting things, so I was really curious to see how Rocksmith did it.

It looks fantastic. Lovely atmospheric visuals, stylistically quite beautiful. Second impression? Lag. Seriously. The folks telling you you won't notice 30ms of latency aren't musicians - they're marketing shills who work for the computer games industry. Having 30 milliseconds of delay between your fingers and your ears is horrible - after ten minutes, it was actually making me feel ill. Kinda like when you're on a roller-coaster and your eyes are disagreeing with your inner ear about which way is up - the same kind of slightly nauseating sensory disconnect. Yuck.

So... just when I was about to give the whole thing up as a failed experiment, I had a daft idea. I plugged in an electro-acoustic and turned the guitar volume in the game right down - I figured the game can play the backing track and the guitar can look after itself, sonically speaking. The experience was instantly transformed - the game engine itself doesn't seem to suffer from any kind of latency, and suddenly I was jamming along to the Stones with a big stupid grin on my face. So I started thinking - maybe there's some way I could link up my existing guitar gear so I can get the same zero-latency experience but with an electric guitar and all the tones and presets in my trusty Line6 PodXT... easy. All you need is something to split the signal as it leaves the guitar. Now although I've not tried, I suspect an ordinary jack splitter would do the trick - plug it into your guitar, then plug the Rocksmith jack-USB cable into one output, and connect the other to your amp or effects rig using a normal guitar lead.

Problem is, I didn't have anything as simple as a splitter amongst my boxes of audio gear... so I ended up doing this instead:

The UA25EX is a really good USB audio adapter, but here I'm just using it as an active splitter, piping one output into the PC via the Rocksmith lead and then running the other one into the PodXT; the Pod's outputs are wired to the PC line-in, and then I've tweaked the Windows volume control so that the line-in is mixed back into the playback signal. Finally, remember to turn the guitar volume in Rocksmith down to zero, and voila - Rocksmith does the backing, Pod does the guitar sound with zero latency, and I'm back to grinning like an idiot. (Yes, I realise I'm using about £1500 worth of gear as a glorified gamepad... but hey, it's not like I bought this gear just to play computer games like Jeff Atwood over at CodingHorror did...) One more thing I changed - under Options ->  Game Settings -> String Layout - set this to inverted. It wasn't obvious at first, but the standard setting mimics the physical layout of guitar strings (i.e. treble at the bottom, bass at the top) while guitar tab and normal notation are written the other way up - things suddenly got a lot more fun once I tweaked this.

So... latency solved, is the game any good?

Well, yeah. It is. And I'm really impressed at how well it equates improvement in guitar technique with in-game progress. Using a combination of training exercises, arcade mini-games and full band backing tracks, it'll take you from tuning up, to playing simple one-note riffs, to slides, bends and hammer-ons. If you can already play, you'll be amazed at how quickly it exposes your weak spots and bad habits - and if you can't, I suspect you'll be really surprised at how quickly you progress. The techniques are clearly demonstrated on-screen, there's a built-in tuner that pops up at regular intervals to make sure your guitar's still in tune, and even following the on-screen color-coded notation isn't too hard - as a guitarist who never learned to sight-read, I was surprised how quickly I started to recognise patterns and phrases as they flew down the screen towards me at 140bpm. It also has distinct guitar and bass modes - including an "emulated bass" mode if you want to learn to play basslines but you've only got a six-string guitar. No five-string bass support, though... here's hoping we get that in Rocksmith 2.

The Guitarcade mini-games deserve a special mention, if only for the stupid amount of time I've spent playing Super Slider. Coloured blocks fall down the grid... you move them left and right by playing slide notes on the guitar. It is stupidly addictive and - because it requires you to change strings and positions without taking your eyes off the screen - it's also great for improving fretboard technique. 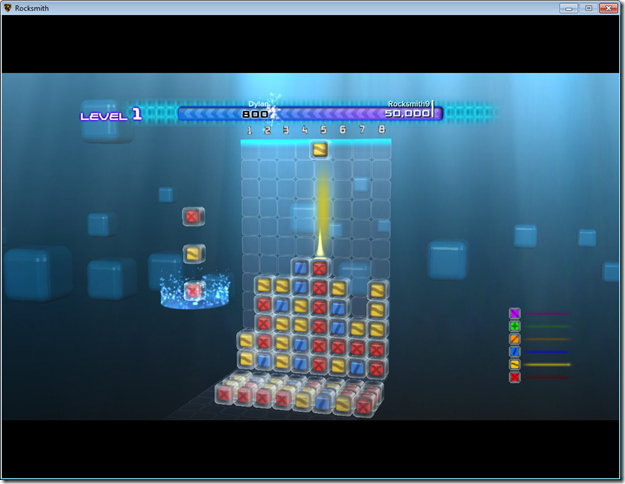 My one frustration is that the game constantly adjusts the difficulty, so there's no way - that I've found, anyway - to just bring up a song on "accurate" difficulty setting and keep practising it until you get it right. A couple of times I actually managed to move up a level just by noodling around and throwing in notes that weren't on the screen - turns out I was getting it right (?) and so the difficulty increased accordingly. I can imagine this being great fun if you already know the tune and you're working on your guitar technique, but it'd be nice if you could just switch it off and dive in at the deep end, so to speak.

In conclusion: great visuals, great gameplay, great implementation. And it actually *works* - once I'd solved the lag problem, I never once felt like I'd hit a note and the game had missed it, which is really impressive when you consider it's analysing the ragged mess of waveforms coming off a six-string guitar in real-time. Sure, the lag sucks and the missing CD keys and crappy attitude really sucks, but neither of those problems is insurmountable with a little patience and ingenuity. And once you get up and running, it's great fun. I can't wait to hear what happens when a generation of kids who grew up on this move onto GarageBand and start recording demos.