I got into work this morning to find Dave excitedly waving a box containing something called Rocksmith - which, it turns out, is a "Guitar Hero"-type game, but you play it using a real guitar. Now, whilst I'm not a serious gamer, I am a tech nerd, and a guitar geek, and this sounded like the best thing ever. If nothing else, for the first time in 15 years, it might actually be a computer game I could beat my brother at... So, this lunchtime, I left the office, wandered to HMV on Piccadilly, and bought it. No download, no Steam, no piracy or dubious torrenting, just good, old-fashioned law-abiding retail. I walked into a physical store, picked up a boxed product, paid £39.99 for it, and left.

Now, here's what the guy in HMV did NOT say when I bought it. He didn't say "Keep the receipt because you'll need to send a copy of it to Ubisoft in order to install your game". He DID offer to sell me "game protection" for a pound, which sounded like (a) a way of charging me money for my own statutory rights, and (b) the biggest rip-off I'd ever heard - ha, maybe he knew something I didn't. But no, after I'd paid for my game, he wished me a pleasant weekend and off I went. The receipt went in the bag, along with the game, and, by the time I returned to work, some samosas and a Chinese pork bun. When I got back to the office, I put the game in my rucksack, the samosas and the pork bun in my belly, and stuck the carrier bag in a drawer. Why am I mentioning this? Ah, just wait and see...

So I get home around nine this evening and open it - look at all the things! It even comes with a jack-USB cable to plug your guitar into your PC - that's cool! OK, and a sheet of rather lame-looking fret stickers. I shudder at the thought of someone sticking these on a '57 Les Paul Standard that they've only dragged out from under the bed because they think Rocksmith might FINALLY get them playing it...

Anyway, I digress. I go to install it, and I'm asked to enter a CD key. This is pretty normal. 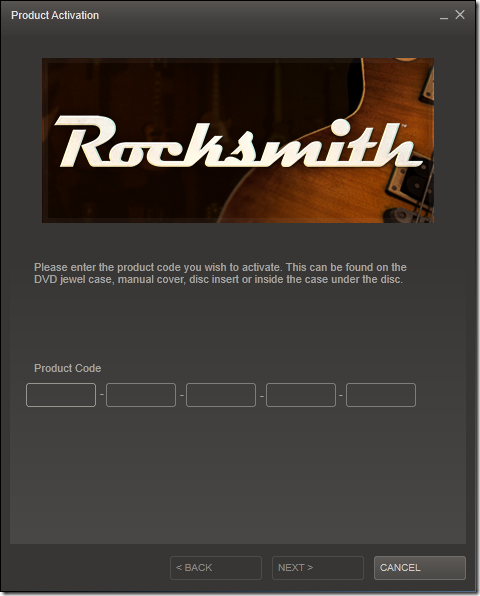 OK... on the jewel case? No. Manual cover? No. Disc insert? Under the disc? No. Oh dear. This is invariably where things get unpleasant. I Google rocksmith CD key and - wow, it looks like I'm not the only one. The top link is to a Ubisoft support article published 4 days ago:

Which links to this article, which says: 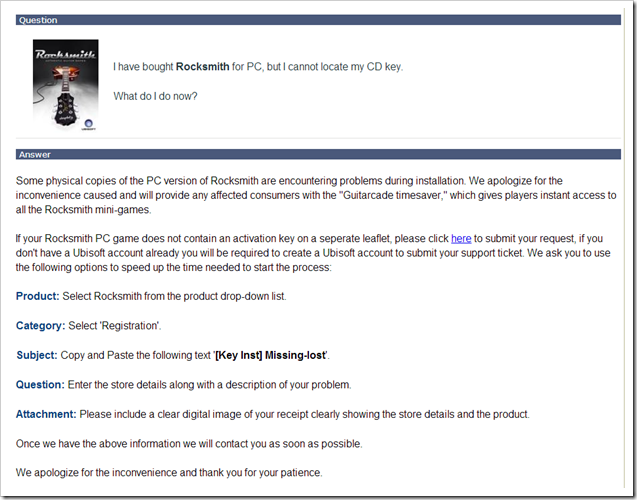 I try giving them a call, but "unfortunately [their] offices are now closed". So it looks like that support article is all I've got until Monday morning. I love the "encountering problems during installation". No, it's not a "problem during installation", it's that the manufacturer screwed up and omitted to include an essential part of the product in the retail packaging. And they'd like a copy of the receipt. Which, as I've mentioned, is in a bag eight miles away.

So, leaving aside that little detail, let's see how far we get. First I have to submit a request. I can't do this without signing in, I can't sign in without creating an account. Of course, this doesn't work first time because their sign-up/login system has 'issues'. Eventually I get as far as submitting a support request: OK, question submitted at 21:52 UK time. And now, I guess, I wait and see what happens. They aim to respond to me "within 24-48 hours, although response times may be longer." Looks like I won't be playing Rocksmith this weekend.

Let's just recap. So far, I've gone out in the rain to purchase a product because it looks like fun. I've spent £39.99. I've spent ten minutes searching through packaging for a non-existent key. I've had to create an account in order to politely request that the manufacturer allow me to use the product. Ubisoft have effectively accused me of having stolen the game assumed I'm not a legitimate customer and I therefore can't install it until I prove otherwise. This isn't a minor manufacturing defect affecting a single unit, like a cracked picture frame or a corked bottle of wine - this looks like they've just deliberately excluded the installation key from boxed retail copies of the game.

What's completely ridiculous is that this is one of the few games in recent history that requires a physical component - the aforementioned USB-guitar cable. They could so easily have encoded a unique key in the cable and used that as a copy protection dongle - after all, you can't download a cable from the Pirate Bay. But no, instead they go for a CD key and don't bother to include one. I appreciate game development is a hugely involved and expensive exercise, and that piracy has the potential to seriously undermine the commercial viability of game development - but treating your customers like criminals to compensate for your own short-sightedness and lack of imagination is not the answer.

Next time I want to spend £40 on something fun to do over a rainy weekend, I'll forgo the delights of proving my innocence to the games industry and just buy some more Lego. At least I've never had to grovel to the manufacturer for permission to start building a Lego set.

UPDATE: E-mail from Ubisoft on Saturday afternoon saying they can't/won't help until I send them the original purchase receipt: 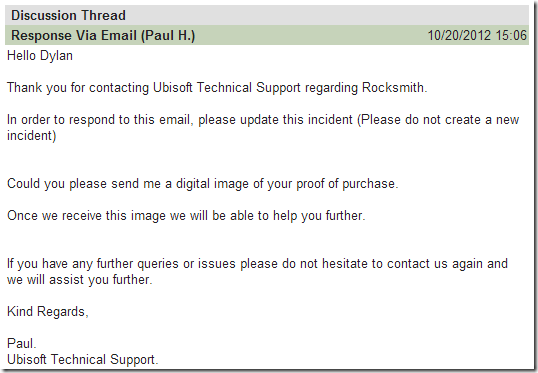 UPDATE 2: I e-mailed them a photo of the receipt on Monday morning at 10am; they e-mailed me a CD key at noon. I wonder whether they actually verify the proof-of-purchase details against the retailers’ records or are just under instructions to give out CD keys to anyone with a convincing-looking receipt…