Our team have just finished a sprint on a project that’s using loads of new technology – MSMQ, NServiceBus, WCF – that we’ve not worked with before, and it’s played havoc somewhat with our estimates of how long everything was going to take. We hit our deadline, but only thanks to the product owner shifting a group of features into the next sprint, and at the retrospective everyone agreed that the process worked just fine but we didn’t have any really good way of visualising it. We have a burn-down chart – actually, we have two, ‘cos there’s one drawn on the whiteboard and there’s one in FogBugz as well – and what we’ve been doing is at the end of every day, we’ll just mark the number of hours left. On days when we discover more problems than we ship features, this looks like we’re moving backwards… which is true in terms of monitoring progress and planning, but isn’t great for morale, and it doesn’t really explain what’s going on.

So, I’ve come up with this, as a way of tracking estimation accuracy and churn as well as straightforward progress. I’ve no idea if it’s original or not, I don’t know whether it has a name, but I’ve called mine a churn-down chart. I’ve annotated this example to show you what happens over the course of the project – click for a bigger version. 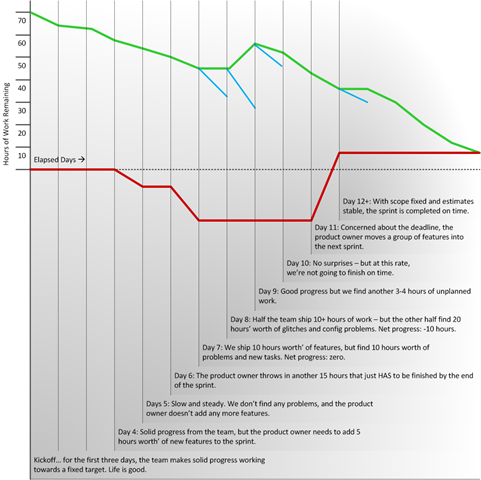 Basically – when the green line hits the red line, you’re done. The product owner controls the red line, by adding and removing features from the sprint. Yes, I know you’re not allowed to add stories to a sprint that’s in progress - I think the chart actually demonstrates why. The little blue tails were inspired by this fantastic visualisation of budget forecasts compared with reality (which I found via Chart Porn), and they track how many hours of features we actually delivered that day, as opposed to how many hours we have left at the end of the day. This clearly shows the difference between days when we were productive but discovered lots of unplanned work, as opposed to days when we were just stuck.

I like the way it empowers the product owner to actually work with the team to hit the deadline – you’re not working towards a fixed target, you’re both dealing with shifting requirements as you find bugs and have ideas, and you can see at a glance whether you’re on target or not, and if not, why not.