This is from SagePay’s new MySagePay admin system, which has brought us all so much joy these past weeks and will go down in history as my second favourite piece of web design ever, after Kibo’s Optimised for WebTV! page.

Today’s happy little discovery. You click to view a transaction. You think “Oops, wrong transaction.” Years of Windows experience means you instinctively hit Cancel – the button marked Cancel, that’s at the bottom-right of the window, just like it is on every other dialog box you’ve seen in the last 25 years. But guess what? In this case, the Cancel button actually cancels the transaction, rather than closing the window and backing out of the operation.

Of course, it wouldn’t do anything that drastic without a confirmation dialog… guess what that dialog looks like? 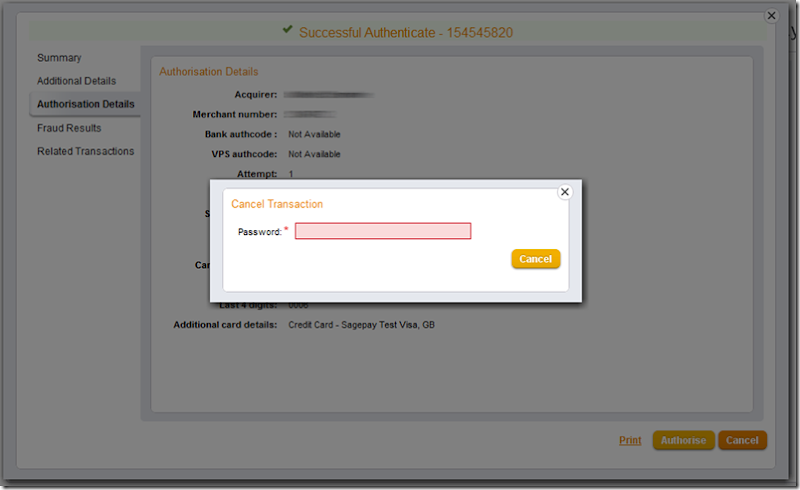 “Cancel” means exactly the same thing in practically every application, window manager and operating system that’s been released for the last 25 years. The idea that anyone might think that using it for a different purpose in a different context is… just unbelievable.

Moral of the story: if your ubiquitous language contains a word or phrase that everyone knows means something else – change the ubiquitous language. Think of a better word. Here’s some to get you started… Unauthenticate. Withdraw. Retract. Deauthenticate. Discard. Abandon. Reject. Decline. Even “Cancel Transaction” would have been better than this.

(and yeah, to cancel the dialog as opposed to the transaction, you click the groovy little X in the top corner, because this is Web 2.0, dontcha know?)