Dynamic CSS with .less at the TechDays Open Source Evening 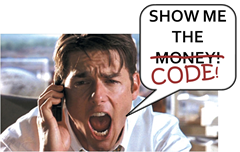 Thanks to all of you who came along to last night’s Open Source .NET evening (and extra thanks to @serialseb for putting the whole thing together!) I think we managed to cover a really great programme of topics – OpenRasta, Ben Hall using Ruby to test ASP.NET projects, Mike Hadlow talking about the Windsor IoC container, Jeremy Skinner presenting his FluentValidation library (and a late apology from Neil Robbins, whose CouchDB talk had to be cancelled after his laptop went into ‘permanent hibernation’ at the last minute… I guess the long cold winter affects laptops as well as people)

I should make one very important clarification: dotLess is NOT my project! The original Ruby project was created by Alexis Sellier and Dmitry Fadeyev, and it was ported to .NET by Christopher Owen, Erik van Brakel and Daniel Hoelbling. Apologies if this wasn’t clear from the presentation – from the questions afterwards, I appear to have inadvertently given the impression I was one of the project contributors. I’m not; I just think it’s an awesome library and wanted to give it a bit of exposure.

You can download the demo code from last night’s talk here:

You should just be able to unzip the whole lot into a folder, bring up LessDemo.sln in Visual Studio and hit “Run” – but let me know if you’re having any problems with it.

The other bits I spoke about in the talk are:

Finally, I’m very excited to see that for the next version of LESS they’re migrating away from server-side Ruby and porting the entire library to Javascript – so you can run it client-side or server-side depending on your setup. Nothing’s officially released yet, but you can get download the latest source from the less.js project on GitHub – definitely a project worth keeping an eye on.