What If They Ran The Trains For Free? 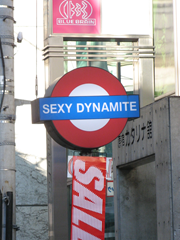 London is gearing up for a two-day Tube strike – industrial action by London Underground staff means tomorrow morning, three million people who’d normally take the tube will be walking, cycling, packing themselves into crowded buses or overground trains, or just pretending they’re sick and staying at home. Papers say the strike is going to cost £100m in lost productivity. The net is a-twitter with harassed Londoners who want to kick Bob Crow in the bollocks.

Now, I recall once hearing a story, which I cannot now find, so the details are somewhat hazy, but I’ll tell it like I remember it and you can tell me if I’m wrong.  It’s about a railway strike. I believe it happened in Japan sometime after the war, but the details aren’t really important. It started out like most industrial disputes – the railway staff wanted something, and the Powers That Be didn’t want to give it to them.

So the staff resorted to industrial action. They didn’t strike, picket, protest, or stay at home. They went to work early, they cleaned the trains, fuelled them, and ran them as usual – but they opened all the barriers, shut off all the ticket machines, and let everybody travel for free.

Imagine if the RMT tried this. There’d be trains full of happy, supportive passengers right now. By Thursday, every commuter, employer and tourist in London would be cheering the drivers, encouraging the staff, showing their support and praising Bob Crow as a public hero. Meanwhile, London Underground are panicking, watching their lost revenue shoot into the tens of millions, and probably hammering out a deal pretty damn sharpish so they can get the ticket barriers switched back on.

Surely that’s a nicer way of making your point than pissing off three million people?