OCTV: Coming Soon to a Screen Near You?

Video surveillance is in the news again; the police insisted that an Islington pub landlord install CCTV cameras as a condition of granting his license application – and the Information Commissioner subsequently pointed out that they’re not really allowed to do that, and now the usual suspects are weighing in on both sides of the same old privacy vs. security debate.  I personally have two contrasting experiences with video surveillance, that make me wonder whether we’re getting this whole thing completely backwards and missing a great opportunity here. 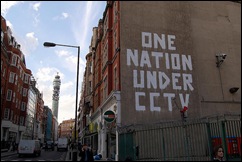 Several years ago, a friend and I were in a pub in central London, and her phone vanished. One moment it was out on the table in front of us; a few minutes later, it was gone – nowhere to be found. We hadn’t left the table, but at some point either it got knocked onto the floor and someone picked it up, or some light-fingered individual just grabbed it whilst we were looking the other way. This happened in a well-lit bar, full of witnesses - and right underneath a CCTV camera. It didn’t do the slightest bit of good. Nobody saw anything – or if they did, they weren’t telling. The CCTV tapes would have shown clearly exactly what happened, but the bar staff point-blank refused to let us see the footage, citing the usual data protection excuses.1

As a counter-example, when I commuted from Southampton to Winchester years ago, the drive home took anywhere from 20 minutes to 2 hours, depending on traffic – so I used to check out the BBC’s traffic webcams before leaving. Even a blurry 320x240 picture that’s five minutes old was good enough to see whether there was a tailback on the M3 or not – sure, it meant once in a while I’d sit at work for an extra hour or two waiting for the traffic to clear, but that was way better than spending that time sat in the traffic jam itself.

Personally, I don’t really object to video surveillance in public places. You’re in a public place, your behaviour and actions can directly affect the people around you. If you’re doing something that you’d rather wasn’t captured on videotape, then I’d probably rather you weren’t doing it in the same pub as me. The problem is that in most cases the only people who can review the resulting footage are the CCTV owners and the police - and whether you question their motives or not, they clearly  have better things to do. The problem isn’t the TV bit of CCTV – it’s the CC. Closing that circuit creates an imbalance of power and feeds an “us and them” mentality that really doesn’t do anybody any favours. 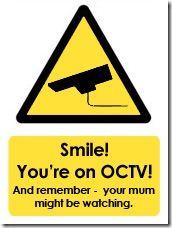 So what if we turned the whole thing upside down? Instead of CCTV, let’s put up signs saying “This area is covered by open circuit television” – and websites where you, or anyone else, can see the footage? Suddenly, all that information is accessible by somebody who actually cares enough to look at it – i.e. you. Even if we’re just dealing with real-time feeds, you can pull up an OCTV feed and see if any of your friends in the pub yet, or whether it’s raining in Camden right now, or how big the queue is outside the cinema.

What about if we made the archived footage available? 24 hours worth would let you pull up the day’s coverage of the street outside your house – so you can prove that the phone company are lying to you about the engineer who they claim “waited outside for an hour”.  You can see who – or what - caused that scratch on the side of your car. A weeks’ worth of archives could show you how many people are out & about on the streets in that neighbourhood where you’re considering buying a house. A year’s worth will show you how many sunny days they’ve had, and how busy it gets when there’s a football game on up the road, and how often the council ‘forget’ to pick up the recycling.

The Metropolitan Police don’t have time to find CCTV evidence for every stolen car or domestic burglary that takes place… because there are too many crimes, too much footage, and not enough surveillance officers. So share it. A police officer can’t justify spending seven hours reviewing footage of a single car theft… but what if it was your car? Would you be prepared to put in those hours? Would your insurance company?

OK, it’s not quite that simple. It’ll make extramarital affairs, gambling problems and skiving off work a bit difficult… sorry about that. On a more serious note, it’ll bring things out into the open that some people would rather stayed hidden… your employer can see where you spend your evenings, your family can see where you really work. Technology’s never going to solve that kind of problem, though - unless by “solve it” you mean “drag it out into the open and mess up everybody’s lives until they learn how to deal with the truth”.

The technology’s not quite there yet, but I think it’s probably pretty close. Solar-powered webcams with built-in GPS and 16Gb of online storage, IPv6 wi-fi connectivity, capturing a HD image every few seconds and uploading the results to some big store in that cloud thingy that all the cool kids are talking about… not cheap (yet), but by no means impossible – and technology just keeps getting cheaper. Our capacity to record and store information is increasing exponentially, and I really don’t think that’s going to stop. When that information ends up locked in vaults and government servers, it’s basically useless – the cost of retrieval and analysis is prohibitive, and short of serious investigations or legal proceedings, that data never comes out again. The internet has demonstrated time and time again that if you share your stuff – images, stories, information – then people will find remarkable, innovative, practical and beautiful things to do with it – things you’d never have imagined. To a government, company or police force, picking valuable data out of literally millions of digital images is an expensive and daunting prospect… but on the web, it’s the kind of thing people do all day, every day, for fun. So what is everyone so afraid of?

1. I discovered recently – far too late to be of any use – that we could have made a formal request under the Data Protection Act, in writing, and paid the £10 administration charge, and received a copy of any footage that we appeared in. Oh well. I know for next time.