Update - looks like you can already do this. chrome.exe will accept a --user-data-dir="" switch, so you can set up shortcuts with different profiles - and it works, really quite well. I now have three Chrome shortcuts that bring up different homepages with different sets of persisted cookies. No colour-coding or cool icons, though...

I have too many Google accounts. Or rather, I have the right number of Google accounts for me, but that's too many for Google, who would seemingly be much happier if I only had the one.

I'll explain. I have a Gmail mailbox, which I forward copies of stuff to, so I can get hold of it from anywhere. My main mailbox runs on a Linux box so old I think it's actually running Redhat instead of Fedora, so Gmail acts as a second-level backup strategy as well. There's a couple of calendars and things in this Google account as well. I also have a Google account linked to my 'real' e-mail address, which I use to sign in to Blogger and various other online services that have ended up under the Google umbrella. Then I have another set of credentials, which are the accounts we've set up at work for access to stuff like Google Webmaster Tools and Google Analytics. I'm not entirely happy with Google linking my e-mail or my blog to my employer's website statistics, so I keep this separate as well.

Basically - I want multiple, independently-persisted identities, with their own history, their own cookies and their own shortcuts, so when I say "remember me", I'm actually saying "remember who I'm pretending to be right now" Google Chrome already has 'incognito mode' (and we all know what that means, right?). Can we have work mode, home mode, geek mode, pretending-to-be-a-client-so-I-can-test-my-own-website mode, and as many other modes as we want? With their own colours? And icons? And desktop / start menu shortcuts? 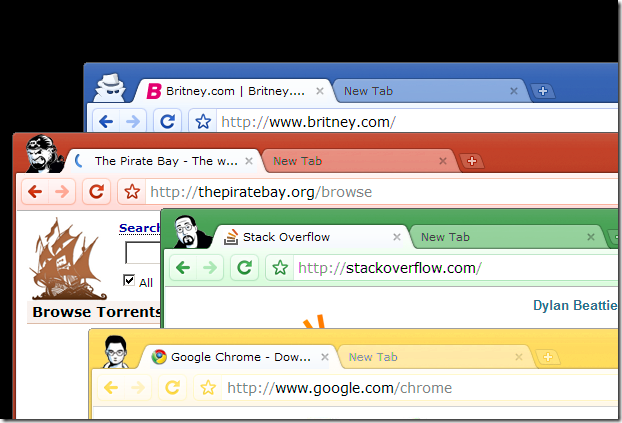 Actually, it doesn't have to be Google Chrome at all, it's just that their little "secret agent" icon guy worked really well for the screen mockup. Firefox could do this. Or even Internet Explorer. I know there are cookie-switcher add-ons for Firefox et al, but what none of these solutions offer, as far as I can tell, is the ability to use multiple identities simultaneously - and since Google's made such a big thing of Chrome's separate-processes-for-each-tab technology, it seems like it couldn't be too hard to give those processes their own profiles and history.