Cycling, Eyedroppers and the Benefits of Laziness Applied with the Proper Tools

I  cycle to work. I work in Leicester Square in London, and I live about three miles away. On a really good day, the trip door-to-door by public transport takes about 25 minutes. On a really bad day, you can end up stuck on a crowded bus full of angry people, in standstill traffic, for two hours, because there's a problem on the Underground on the same day they're digging up the water mains along the bus route. 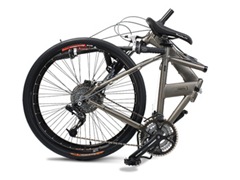 By bike, it takes about 20 minutes, plus time to shower & change when you get there. But that's a constant. It doesn't vary depending on traffic or roadworks or industrial action by Underground staff.

I believe that cycling is the 'optimum' way to travel to and from work. If software development was travel, cycling would be agile, test-driven and all that jazz. It's healthy, it's cheap, it's green, it's often fun. What I really love about it, though, is that even after a rotten day when I'm tired and fed up and just want to go home, I still get 20 minutes of exercise on the way home, because I have to get home somehow, and cycling is the fastest and easiest way to do it.

Good software tools should be like bikes; they should encourage better habits by making the right thing to do  the same as the easy thing to do.

Which, by a rather circuitous route, brings us to Instant Eyedropper, which I stumbled upon earlier this week and find myself rather smitten with. It's tiny. It's fast. It's free. It works ridiculously well. It loads on startup, sits in your system tray, and when you need a colour , you just drag it out of the system tray, drop it onto the colour you need, and it copies the appropriate hex code to your clipboard. It takes about a second - literally - and then gets the hell out of your way so you can get on with whatever you were doing.

I have occasionally, in the past, "guessed" HTML colour codes on the fly because I can't face digging through CSS looking for the or opening Photoshop just to use the eyedropper tool to pick a colour off a screen capture. I've used eyedropper tools before, but somehow they've never quite got the formula right. With Instant Eyedropper, thought, when you're in a hurry, it's quicker to do it properly than it is to guess. I like that.