We're on a green drive. London is having a full-fledged heatwave, the temperature is regularly hitting 30°, and sitting in a room surrounded by electrical equipment that basically sits there spitting out heat all day suddenly doesn't seem like such a good idea. When you realise that all that heat is basically wasted electricity - that I'm paying for, and then trying desperately to push out of my windows to cool the room down - a little geek spring-cleaning suddenly seems like a pretty good idea. 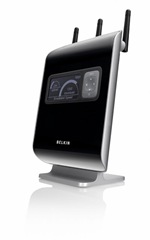 First off, last month I replaced the motley collection of switches, DSL routers and wireless access points - along with their accompanying individual power supplies - with a Belkin N1 Vision. This truly wonderful gizmo combines a DSL router, four Gigabit wired ethernet ports and draft 802.11n, in a really innovative package. The LCD readout on the front is frankly genius. Download monitor; wi-fi status readout; desk clock, DSL speed meter - it's intuitive, versatile and just very, very cool. And it works. I don't have to keep unplugging it to get wi-fi working again, like I did with the old one. The DSL automatically comes back on when power is restored (a major gripe I had with my old Speedtouch router). I love it. My computers love it. Maria's iPhone really loves it. And it's fast enough to watch movies over wi-fi from pretty much anywhere in the house. 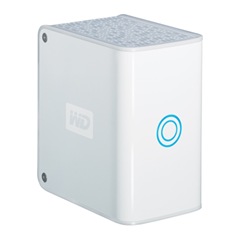 The really neat part, though, is a Western Digital My Book World Edition II. It's basically two cheap SATA hard drives in a box, with a fan and a low-powered CPU running a cut-down version of Linux, and some dreadful but completely optional Mionet software. You might remember these as the subject of some truly awful press coverage last year. The truth is, the supplied (but optional) MioNet software won't share certain file types with anonymous users over a public-facing connection. The press picked this up as "network hard drive won't share files" - which is almost total bollocks - and ran with it.

But I digress. Despite the apparently slow network interface, it works - easy to set up, easy to get files onto it, easy to get them off again. The fun really starts, though, when you work out how to get console access to the onboard Linux OS. (Neat tip - once you've got SSH access, it's much quicker to transfer big files - music, video, etc. - by copying them onto an external USB drive, plugging it into the back of the MyBook, SSHing into the console and copying it onto the internal HD using Linux 'cp' command, than to copy them over the network.) With a couple of evening's tinkering and copius assistance from the wiki at mybookworld.wikidot.com, it's now acting as an iTunes media server (via MediaTomb) and print server. The kind of stuff I used to leave a "proper" PC running 24/7 to do. The print server, in particular, is very neat - any computer in the house, including wireless, printing to a completely normal USB Canon Pixma iP5300, and it's even smart enough to work with the printer's power-save features... send a print job, printer wakes up, prints it, and goes back to sleep with nary so much as a standby light.

Basically, the "infrastructure" - file server, wi-fi, DSL, printing support - that all the other computers rely on is now running on two small appliances and a printer that only switches itself on when it's needed. I'm going to get one of those electricity meter things to get some hard stats on how much power this lot actually draws, but in the meantime it's definitely cooler and quieter than a full-blown server and pile of networking gear - and I figure that has to be good for the electricity bill and the planet. Not to mention how much fun it is doing things that aren't supposed to be possible in the first place.